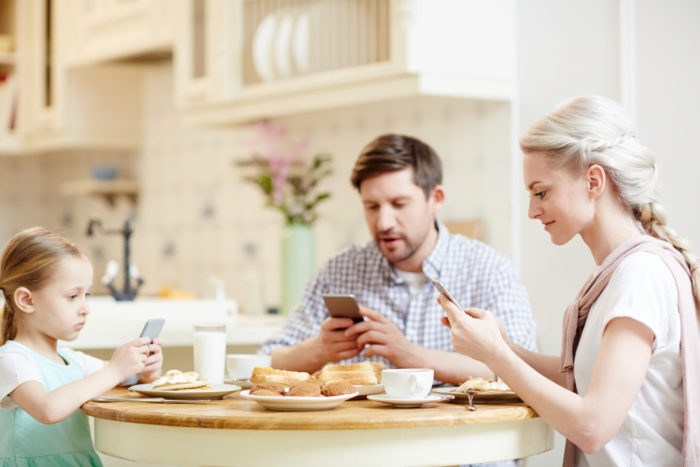 Do Parents (Not Children) Need to Limit Phone Use at Home?

The extent to which children are addicted to technology has been a hot topic for decades, but the focus is now shifting to their elders. Are parents on their phones too much?

You’ve probably talked about your personal phone use in recent months – and have perhaps even made a New Year’s resolution too cut down your screen time. South Hampstead School have gone one step further. In a recent letter sent home, they have asked parents to sign a phone limit contract.

Has South Hampstead School overstepped the line or were they right to take action?

A phone use ‘contract’

The Family Phone Pledge was originally created by a group of A Level Psychology students at London’s South Hampstead High School. It’s a voluntary initiative which acts as a contract between parents and children, with a range of optional pledges for both parents and children.

For children, these pledges are split into four groups – social, sleep study and school (the ‘4S’s of screen time), so:

Parents’ pledges include the social and sleep groups, with similar options like charging their phone outside the bedroom overnight.

The all-girls school sent the contract out to parents and made it available online. The question is whether it is a required suggestion…

The impact of phone usage

Many people, particularly the parents involved, may see these suggestions as controversial. It’s arguably an infringement on personal space and freedom of conduct.

At the same time, it’s undeniable that the rise of this technology has rapidly changed our lives. In many ways, the change has been positive. Phones keep us connected, they drive business and they make it easier to access information instantly.

For all the positivity, there are also some clear flaws emerging. Studies have identified phone use having a negative impact on relationships, mood, anxiety, social skills, awareness, eye health, attention span and our circadian rhythm.

While these detrimental effects are well-documented, they are typically accepted as collateral for the more valuable benefits. Why? In short, it’s because we’re dependent. Our phones have become our tiny companions, without which most of us are lost. As a result, adults struggle to use them with any kind of healthy balance. It’s all or nothing – with “all” generally being the choice.

Are you addicted to your phone?

While phone addiction isn’t something that can be diagnosed, there are some suggestions that it could be very real. Psychologists have compared phones to slot machines, citing the “trigger, action, reward” design of several apps. This causes addictive behaviour in users such as:

At the very least, this addictive feeling can lead to unhealthy phone usage. One such example is the practice of “phubbing”. Short for phone-snubbing, this refers to checking your phone while you’re in a conversation, effectively ignoring the person you’re with. It reduces the amount of attention you’re giving them and diminishes the quality of face-to-face communication.

Want to check your phone addiction? An online test has been developed by the University of Connecticut. Answer yes to more than 5 of the questions and you could have a problematic relationship with your smartphone, according to the creators.

The effect on children

The main concern is that this change has occurred with such haste that we haven’t had the chance to truly assess the impact of it. Now, we have the first generation of children growing up with phones as a regular part of their lives. Will these detrimental effects be amplified for children? Or will they simply grow accustomed to them?

We quite simply don’t know. Adults struggle to stray away from the addiction of these devices even when in the knowledge of the negative impact they may be having on our lives. How do we expect children to be able to fare better?

Coming to a compromise

Phones are a part of our lives now and it’s very unlikely that they’re going anywhere any time soon. With that in mind, we don’t want to stigmatise something that has become essential, and that the children will inevitably encounter later in life. But it may be a good idea to err on the side of caution by enabling healthy integration into children’s lives.

This suggestions in the Family Phone Pledge seem to be reasonable, suggesting that children and adults cut out phone use at mealtimes, bedtime and other important daily activities. They encourage healthy use for children, allowing the best of both worlds – the world of the internet and that other thing we call life, that so often distracts us from our screen time.